Stoats under the hen house! 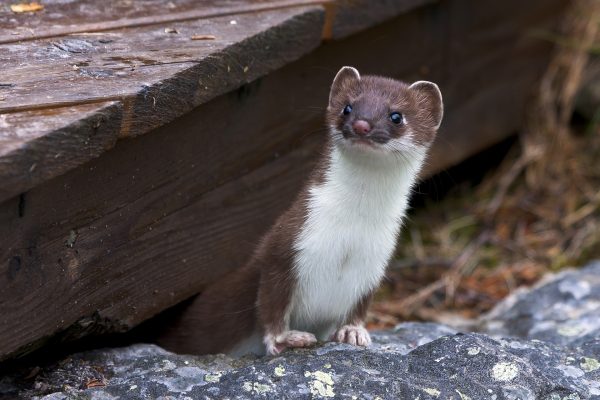 One night we were woken by a series of unusual and very loud calls which we thought were similar to the cry of a species of nocturnal petrel that fly across the North Auckland peninsular from their burrows on Little Barrier Island to feed in the Kaipara Harbour.

A few days later my wife Lois came to tell me that there were a pair of brown eyes looking out from under our fowl house. She thought they were those of a mustelid.

And so began an interesting few weeks. We set up tracking tunnels a metre or so from the fowl house and placed Black Trakka monitoring cards in each tunnel along with some chicken meat as a lure.

On one tunnel I fixed a “Dick Smith” camera which we linked to our TV set.

We didn’t have long to wait before our stoat came into view. We could tell it was a stoat because of the distinguishing black tip on its tail. The animal had a finely shaped head and jaw which indicated it was a female.

She ate voraciously and after a while had three eating times: 10.30am, 1.30 pm, and 4.30 pm. We obtained a large number of sets of tracks on our recording cards. The feet of the animal were interesting. The front feet were 10 mm in width and did not splay when it was carrying food under the fowl house. We couldn’t see under the fowl house as it is too close to the ground.

The back feet were 15mm in width. We obtained hundreds of tracks and there was virtually no variance in the size of the feet.

At one point the cards recorded a larger number of tracks and when I studied these I realized they were the tracks of another animal. The difference in size between the front feet and the back feet was much smaller. I now know these are tracks of a male stoat.

On one occasion I placed a tracking tunnel forty metres from the fowl house and placed a child’s colourful spinning windmill close beside. The stoat went through the tunnel. Following a heavy downpour, the stoat disappeared.

A few months later while working with stoats on a research project at Landcare Research, I was amazed when a stoat began to call. It was the same call that had woken Lois and me. It was a huge booming call that on a still night would travel for hundreds of metres and is obviously an effective communication system for stoats. When I expressed my amazement to the Landcare Technicians, as I had never read of stoats making a loud call, they were able to inform me that the calls weren’t unusual. I went back down to Landcare with Ass. Professor Dianne Brunton and while we recorded a series of stoat calls we unfortunately did not hear the loud call.