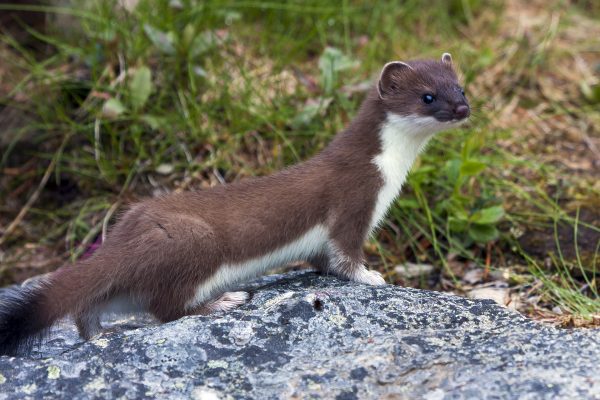 Scientist Peter King has had several lines of Gotcha Traps monitoring tunnels set out for 9 years as part of a rat control programme in a wider study of the effect of rat numbers on other species. The tunnels are spaced at 50m intervals within the lines.

He did not use lines 7, 8 and 9 in this particular project.

Peter discovered a kereru egg lying on the ground. The egg appeared to have come from a tree that was within his study area. By the damage to the shell, it was clear the egg had been predated. Peter took advice and concluded the egg had been removed from a nest by a stoat.

He placed Black Trakka monitoring cards in his tunnels along with the Connovation stoat lure Erayz to monitor for stoat tracks.

Stoat tracks were immediately recorded in 6 of the tunnels in lines 1, 2 and 3.

Peter then renewed the tracking cards, each lured with Connovation Erayz, in the 6 tunnels that had been tracked by the stoat.

He also placed a Groucher trap at the end of each relured tunnel. The Black Trakka tunnels and the Groucher traps are of similar dimensions allowing an animal to move freely from one to the other.

On the first night, the traps were set, Peter caught a male stoat. No further stoats were caught.

The pigeons laid a further egg for a chick that was later hatched and successfully fledged.

With the increasing ability to identify individual mustelids by the use of the Black Trakka monitoring cards and the success of the Connovation lure consideration should be given to the targeting of individual animals as demonstrated so successfully by Peter King.

To further examine the tracks of mustelids I have had a number of weasels and stoats caught live to run the animals through Black Trakka Tunnels and across monitoring cards. My friends the conservationists, Willy and Robyn Ducre recorded the valuable observations contained in our guides.

We were able to sex and weigh the animals.

As with the stoat that lived under my fowl house for a summer, the female weasels have back feet that are some 50% wider than their front feet.

With male weasels and stoats, there is a much smaller difference between the size of the feet. The back feet are about 10% wider than the front feet.

The size of the feet varies between individual animals. Thus it is quite possible to identify and determine how many different individuals you have in an area.

It appears that weasels place more pressure on the heel of their foot than do stoats.

Central pads are usually well defined. As with the stoat, the underside of the weasel’s feet is covered in fine hair.

When caged, weasels move so fast they are difficult for the human eye to follow.

As with weasel and stoats, ferrets have very fine hairs covering the underside of their feet. They track 4 toes on the front feet and five on the back. The female has hind feet 50% wider than the front feet.